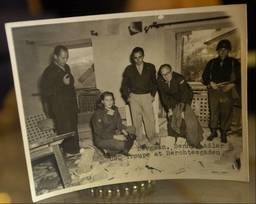 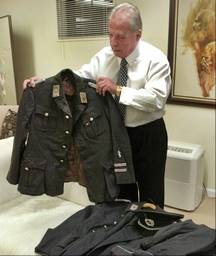 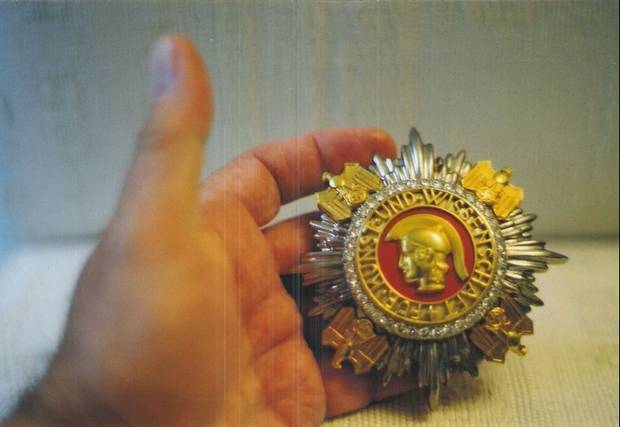 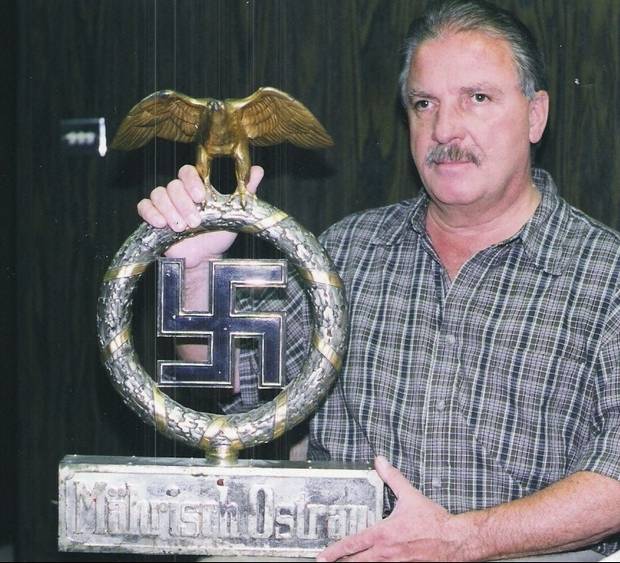 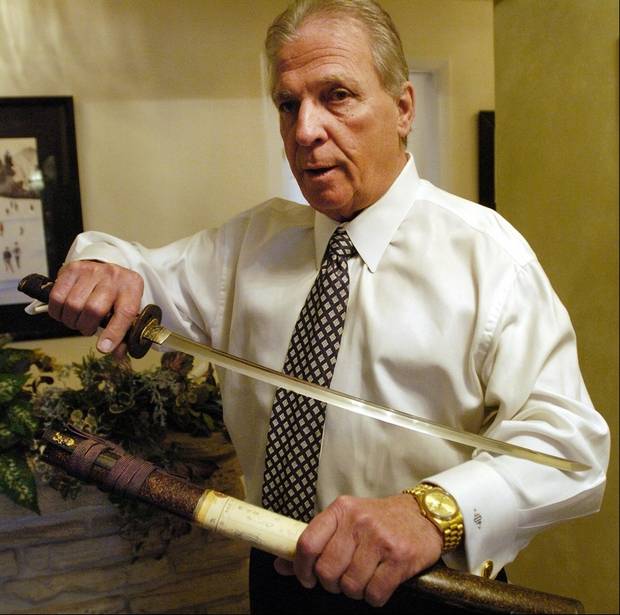 As a boy growing up in the Pilsen neighborhood of Chicago, Jim Dryden was thrilled when he was given a couple of swords and a helmet that his uncles in the military brought home from World War II.

"It piqued my interest," recalls the man whose childhood pursuit still hasn't peaked. Now nearing retirement age and constantly on the search for more war souvenirs, Dryden has amassed a World War II collection of about 100,000 items.

"It's a hobby," observes the reserved Dryden, who lives in Hawthorn Woods and makes his living as a financial services consultant and partner in debt-collection agencies. Not a military dealer -- he bristles at the thought of selling things from his collection and doesn't reveal how much it is worth -- Dryden says his only goal is to preserve a history that might otherwise fade.

"Kids today have no knowledge of World War II," Dryden says. That war ended 68 years ago, and members of the "Greatest Generation" who won it are dying off and will soon be gone, he adds.

Demands for space, the need for preservation and the fear of theft force Dryden to store his collection in a humidity-controlled, secure storage facility and not in his home. He bought his first item, a Hitler Youth dagger, while he was a teenager attending the University of Chicago. His inventory boasts daggers, samurai swords, countless medals, rare military uniforms, old photographs, documents, flags and even the silver table setting once used by Adolf Hitler, the Nazi dictator who orchestrated the Holocaust.

A family in the Northwest suburbs sold him Hitler's silver set about 15 years ago, Dryden says. A relative of that family served in the 101st Airborne Division, which raided Hitler's vacation retreat in the mountains above Berchtesgaden near the end of the war. Produced by the noted Wellner silversmith family, Hitler's silverware, bowls, cups and other tableware are stamped with swastikas and the initials "A.H."

While the online auction website eBay won't allow sales of items from Hitler or the Nazi party, preserving the personal belongings of a man synonymous with evil serves a purpose, Dryden says. He dismisses suggestions any remnants of Hitler and the Nazis should be melted down, burned or wiped from the globe.

"I think that's absolute hogwash," says Dryden, repeating the "never forget" mantra embraced by many survivors of the Holocaust. He says people should remember the history while repudiating the evil that fuels today's neo-Nazi organizations and racist clubs that celebrate Hitler or use the swastika.

"We are totally involved in the preservation of history and historical artifacts. We are in no way affiliated with nor do we endorse any group or movement that is connected with subversive ideology," reads a note on his warsouvenirs.com website.

Dryden's most-prized possession might be the spectacularly ornate and extremely rare German National Prize for Arts and Science medal. When the 1935 Nobel Peace Prize was awarded to pacifist writer Carl von Ossietzky, who was imprisoned in a concentration camp in Germany, Hitler was furious. The dictator forbade Germans from accepting Nobel Prizes and instituted his own awards instead.

Gold and platinum and ringed by 40 quarter-carat French-cut diamonds, the medal owned by Dryden was presented by Hitler in 1938 to Wilhelm Emil "Willy" Messerschmitt, the German aircraft designer whose planes were the workhorses of the German Luftwaffe. A U.S. soldier acquired the medal during the war and "sent it home to his kid brother as a souvenir," says Dryden, who purchased the treasure from a woman in South Barrington. The suburban woman phoned Dryden to see if he might buy it before she followed through on her alternative plan.

"She said, 'I took it to my jeweler, and he's going to make some jewelry out of it,'" Dryden recalls, shuddering at the prospect of that piece of history being reduced to fashion accessories.

He buys many of his items from veterans or their relatives. Others come from fellow collectors who tire of the hobby, run out of space or need the money. People who had works of art and other valuables stolen by the Nazis have successfully sued to have them returned. But U.S. code decrees that "minor articles of personal property" taken by soldiers as "war trophies" are considered the "spoils of war."

A volunteer with Honor Flight, a charity that flies veterans to Washington to visit the World War II Memorial, Dryden says it would be unseemly to seek souvenirs during those trips.

"I never even mention my hobby to any of the people there," he says. But when people call him with offers to sell something, he responds quickly.

"I attempt to get stories from the veterans. Did they take them off prisoners who surrendered? Did they take them off a battlefield?" Dryden says. Of course, sometimes stories are embellished. One person sold Dryden a dagger, assuring him "my grandfather took it from a soldier on the battlefield." The dagger carried a Hitler Youth emblem and "obviously belonged to a 10- or 12-year-old boy," Dryden says.

"Many of the fellows, especially if they were officers, would send back tons of stuff from Japan and Germany," Dryden says. "Most of the veterans brought back items they could use."

Binoculars and knives were especially popular. "You'd be amazed at the daggers that were used as gardening utensils," Dryden says.

Wear, rust and damage lower the value of any collectible item.

"I bought many swords during the years that have nicks in them because the kids played with them," says Dryden.

While Luger pistols used by the Nazis are popular collectibles, Dryden has none.

"I do not collect firearms," says Dryden, who notes that he's never fired a shot and shuns buying collectible guns because of "my dislike of firearms."

He also shies away from war souvenirs of Korea, Vietnam and modern conflicts. He does, however, collect Civil War memorabilia and swords from all eras.

"This is a hand-forged steel blade," Dryden says as he gently grasps a silk-wrapped handle to pull a 500-year-old wakizashi, a Japanese samurai sword, from its lacquered-wood scabbard.

In addition to his war souvenirs, Dryden has some of the baseball and football cards he collected as a boy. Chicago Bears fans would appreciate his pristine Leaf Gum Company 1948 card featuring rookie quarterback Sid Luckman, who is still the team's all-time passing leader.

Dryden says his daughter, who lives in Bartlett, and his son, a student at the University of Minnesota, appreciate his hobby but don't share his passion. Admitting to some frustration in not being able to display the items in his home, Dryden says he hopes to open a museum after he retires. New generations should see the souvenirs and be inspired to learn about war and the people who fought, Dryden says.

In the meantime, he continues to advertise his website and phone number of (847) 438-3191. He doesn't buy everything, he notes, telling how he recently turned down a Purple Heart medal.

"Your dad earned that. Keep it," Dryden told the potential seller.

He makes his money in his finance career. Preserving war souvenirs is his hobby, Dryden says.

"If nothing is done with them, they deteriorate," Dryden says. "They get lost in flooded basements. They get moth-eaten. And eventually they get thrown away and lost to history."